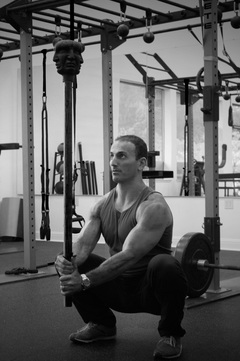 For much of the past year, fitness guru Leo Vassershteyn was on the hunt for the next chapter in his rapidly growing Mill Valley Personal Fitness studio downtown.

That growth had him bursting at the seams of his 750-square-foot space on Sunnyside Avenue, and by Oct. 1 he’d found a new home at 419 Miller Ave., next to Swirl, in a space that doubled his square footage and gave him significantly higher, more gym-appropriate ceilings.

As a result, the move is much more than an expansion. It’s resulted in a new moniker: Iron Lion Gym.

Drawing on both his first name (Latin for “lion”) and his oft-cited goal of “making people into beats,” Vassershteyn has made “forging the beast” his slogan, and since forging is a process of shaping metal, the new name fell into place.

Now that he’s been in his new space for six weeks, Vassershteyn is making the most of the addition vertical and horizontal space. Iron Lion Gym is adding elements like climbing ropes and peg boards that take advantage of the additional elevation.

“We’re getting our bearings,” Vassershteyn says, noting that foot traffic has spiked by “at least five times” over his former Sunnyside location. “The main thing is that it is allowing us to get into much more diverse programming than we did before.”

That includes incorporating steel mace and Indian club training, ancient Hindu training implements that come out of combat training and that Vassershteyn says “work wonders” by forcing users to have uneven weight distribution.

“They teach you how to move dynamically with an implement,” he says. “We’re now training in some of the most functional modalities out there. And they work better than anything on shoulder injuries.”

Born in Odessa, Ukraine, Vassershteyn moved with his family as a child to the Bay Area in the aftermath of the collapse of the Soviet Union. He attended Sequoia High School in Redwood City and, like many grads, wasn’t sure exactly what his next step was. He was a gym rat and began doing some personal training, a job that brought a good wage and provided the flexibility he needed to start taking college classes at the same time. Along the way, he realized that the way he’d been earning a living while he figured out a long-term was that long-term plan.

Now he’s several years into that long-term plan, and he’s seizing on the opportunities the new space provides.

“It’s become a playground for adults,” Vassershteyn adds. “We train adults to move like they’re kids again. That’s why I have the space.”
​
The 411: Iron Lion Gym is at 419 Miller Avenue. More info.